if you visit Kashmir and skip Pahalham Valley so you have waste your days also money, Pahalgam Valley is a most beautiful Valley located in South Kashmir UT. and for those who only want to visit and take a night stay there,
we offer the Best Pahalgam Tour Packages for You, in our all Kashmir tour you will find one or two night stays in Pahalgam Like Srinagar tour Packages & Gulmarg Tour Packages.
it’s a popular Valley for Couples & Family book our Kashmir Couple tour for Pahalgam and explore the beauty like Aru Valley, Betab Valley Chandinwari, etc. also Family Tour packages for Kashmir Pahalgam and get cheap deals on Pahalgam Tours with us 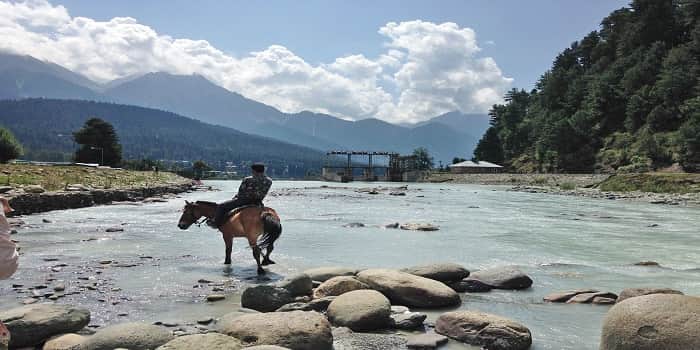 Pahalgam Tour & Holiday Packages, Visit Pahalgam and explore the landscape nature beauty waterfalls in Betab Balley, Pahalgam is 87 km from Srinagar city located in Southside Anantnag Union territory of Jammu & Kashmir. you can reach by air from Srinagar Airport and By road to Jammu via Patnitop road. Book our best Pahalgam Tour Packages and take the best night’s stay in hotels near town and explore Chandinwari Aru & Betab Valley with our best Kashmir Tour services. check our 3 NIght 4 Days, 4 Night 5 Days Tour Packages that we suggest you cover Srinagar Tour and Pahalgam trip in one package. Pahalgam is not only famous for its beauty but also travel activities where you can do River rafting in Ladire River Horse Riding for Betab Valley, and you can explore the top mountain by walk if you want to Raft

Our company offers you all the best packages and provides you all the tourism information about Pahalgam such as How many days is enough to visit Pahalgam, How can you reach Pahalgam, the Best Time to visit. so contact us any time to get the best deals

Day First Srinagar Arivile: {Note if you will come from Jammu by road then we will transfer you directly to Pahalgam} on this day we will pick up you at Srinagar airport and transfer to Houseboat in Dal Lake. the same day you will go Mughal Gardens & take Shikara Ride in Dal Lake

Day 2nd Srinagar to Pahalgam: in the early morning our diver will transfer you to Pahalgam 87 km from the city located in District Ananthnag its also a Subdistrict. and on the way, you can visit Saffron Fildes in Pampora  and Temple in Beijbhra. after reaching Pahalgam take rest in the Hotel, and the evening goes to the Town for Shopping. Night stay in Hotel

Day 3 Pahalgam to Aru & Betab Valley: this day you will explore all the near places such as Aru Valley & Betab Valley also you can do River Rafting in River Lidder in Pahalgam, and take Night stay in Hotel

Day 4 Your Drop at Airport: this day we will send you at Srinagar Airport
Note: if you will book Pahalgam Tour from Jammu so first day you will take Night stay in Patnitop and after that, you will reach Pahalgam

Pahalgam is one of the well known wellbeing resorts of Jammu and Kashmir State. It is arranged in the north east of District Anantnag among grand slopes covered with evergreen timberlands. Its cool stimulating and charming environment, the musical progression of Lidder Nallah draw in vacationers from inside the country as well as from abroad also. It is additionally a significant travel camp en route to sacred Amar Nath Ji Cave, which is 72 Kms from the District Head-Quarte
r. Pahalgam, otherwise called the “Valley of Shepherds”, situated in the Anantnag District of Kashmir, is a nature darlings retreat, which causes us to accept that heaven isn’t far all of the time. Sitting on the banks of the frothing and sputtering Lidder River, this renowned traveler place in Kashmir hypnotizes guests with its lavish knolls, verdant backwoods, sky-kissing mountains, apple plantations, and exceptionally quiet climate.

It is considered as a part of the top vacationer locations of Kashmir since there are open doors for setting up camp, touring, traveling, journey yatra, wilderness boating and fishing.

A family occasion to Pahalgam is exceptionally interesting and you can do a great deal of things to make your excursion a sensational one. You can invest energy by the bank of the Lidder River and partake in the delighted organization of Mother Nature. Different spots where you can see the dazzling magnificence of Pahalgam are Aru and Betaab valleys alongside Bainsaran, which are specked with glades, lakes and streams.

Pahalgam is additionally famous as a profound objective for being the beginning stage of the Amarnath Yatra, which is attempted by Hindu explorers during the long periods of June and August, and starts at a town called Chandanwari, found very nearly 16 kilometers from it.

For experience lovers, Pahalgam is an asylum as they can appreciate setting up camp at Tarsar Lake, Lidderwat, Kolahoi Glacier and Panchtarni. An extreme adrenaline rush looks for you with wilderness boating at Lidder River, which is likewise renowned for an exciting action like trout fishing.
It is additionally the beginning stage of the yearly Amarnath Yatra when large number of Shiva fans accumulate here.The town of Pahalgam is very traveler agreeable with heaps of inns and cabins to take special care of every one of your requirements. Pahalgam is additionally exceptionally well known among the journeying and experience local area; likewise among customers!